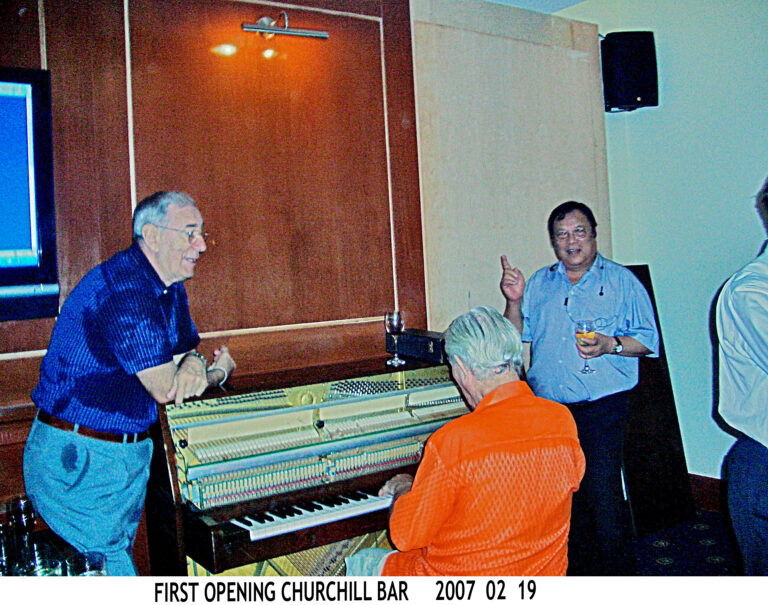 Jack Dunford wrote three articles in Outpost in September, October and November 2017, featuring 17 of 28 pictures donated by Dr. Patrick (Paddy) Dickson. Picture numbers referred to have been inserted in the text

Dr. Patrick (Paddy) Dickson  (D6) donated a file of pictures taken at the British Club in 1965 and in 1966 when the Swimming Pool was being built. They provide glimpses into a bygone era and a wonderful record of this momentous time in the Club’s history. Most of the images are not of great quality but I am going to share the best over three months because they need to be shown at a reasonable size to be appreciated.

What is now known as the Poolside was originally a tennis club with 8 grass courts, purchased from the Danish-owned Siam Electricity Company in 1919. The swimming pool, Surawongse sala, changing rooms, kitchen and Squash Court #1 were built on Tennis Courts #5&6 and the pictures this month show construction underway. There was a soft opening on 12th August 1966

The first picture (!) shows a view of Courts 1 to 6 down the driveway to Surawongse Road before construction began and you will note cars parked along the near side of the Front Lawn as also shown in the second picture.  According to Paddy this would have been where tennis players parked, played their game, then jumped back in and drove off. According to our official Club history, Saturday afternoon was the busiest time on the courts with curry tiffin served on the Front Lawn and calls of  ‘Boy, another gin and tonic over here’ punctuating play.

Squash was a rapidly growing sport at the time and soon a second court had to be added in 1970 and yet a third in 1981.

The AIA building piercing the skyline on Suriwongse Road in picture 6 (6) was one of the first two tall buildings in Bangkok and is still there (not to be confused with the new one next to Club built in the 1980s). The other was the Chokchai building on Sukhumvit Road which featured in one of my pictures in Outpost April 2016.

Over three months I am sharing pictures taken at the British Club in 1965 and 1966 by Dr. Paddy Dickson when the Swimming Pool was built. Last month featured construction of the swimming pool on Tennis Courts 5&6. Part 2 this month features other views around the Clubhouse before the poolside construction began in 1965, including the bowling alley.

Paddy tells me that two American enthusiasts introduced 10-pin bowling to the Club. Bowling balls were not available in Thailand so they had beautiful ones made here out of wood, larger than modern ones but with finger holes etc.. The Bowling Alley was along the side of the Back Lawn where the car park is now. Apparently great dexterity was required by the boy who stood at the end and had to leap out of the way as balls arrived before resetting the pins!

The bowling alley had already fallen into disuse by the time I arrived in 1978 and was being used as the staff changing area. There was a klong down the Neilson Hays side of the building. The building was knocked down and the klong filled in to form the car park in the 1990s

Picture 4 on the Back Lawn (8) shows the upstairs balcony. For years following, this was closed in as cupboards and space for the air-conditioning units in the Surawongse Room until reopened in 2013 as the 1910 Balcony during Phil Alexander’s time as Chairman. Paddy says that during his time he remembers it as being mainly used as a storage area for tables etc, and presumably was closed in shortly after this picture was taken.

The same picture shows the open Verandah downstairs. This was closed to become part of the Churchill Bar in 1990 (See Outpost October 2015)

The picture of the Clubhouse entrance (11) shows the exposed brickwork around the porch … a feature we are considering restoring.

The final picture (12) shows a small children’s play area on the Front Lawn just where the temporary family facilities are now during construction of the Silom Wing.

This is the final of three spreads of pictures taken at the British Club in 1965 and 1966 by Dr. Paddy Dickson when the Swimming Pool was built. The last two months we have featured construction of the swimming pool and facilities around the clubhouse at the time, including the bowling alley. This month we have a mixture of the ‘best of the rest’.

The Kitchen corner picture (13) shows the original kitchen which has since been extended and storerooms added towards the school next door. The old school building can seen.

Paddy tells me that in those days the exit to the Silom Road was a rough un-surfaced Soi. Immediately on the left were three residences set back far enough apparently to pull in and park if you forgot your specs at the Club and needed to go back. The first house was Dr. Chalerm’s who also practiced at the BNH with Dr. Paddy. The picture (14) shows Dr, Chalerm’s House standing where the Narai Hotel Ballroom now stands at the Southern boundary of the Club. This area is the site of the Silom Wing project.

On the right of the Soi, in front of the school were a lot of charcoal businesses, which Paddy says was the main charcoal distribution centre in the middle of Bangkok. Many Members of my era will remember that there were still a few charcoal carts around the area in the 70s and one particularly pretty girl who based her cart just outside the Club entrance. The Soi then crossed a steep bridge over a klong before reaching Silom Road where Chairman to be, Charles Stuart, had a shop on the corner.

The picture (15) from the Silom Car park corner was just before the poolside construction began. The AIA building on Surawongse Road featured in Part 1 was still under construction. This shows the school, which stood where the new AIA building now stands.

There is lovely picture (16) of work inside Squash Court #1 and another from the swimming pool (17). Unfortunately the Member responsible for overseeing construction was on leave when it went up and when he came back he found it had been built two feet too narrow. It had to be closed for four weeks to get it right and the additional width is still marked by the extra pillar on the Court #1 balcony.